The Institute of Studies on Religion – ISER – is a secular Brazilian civil society organization, whose goal is to promote studies, research and social intervention along the thematic axes of protection of rights, public safety, environment and religious diversity.

Founded in the adverse context of the Brazilian civil-military dictatorship, in 1970 in the city of Campinas (SP), ISER transferred to Rio de Janeiro in 1979. During the country’s redemocratization process, the Institute contributed to the reorganization of social movements as well as to the emergence and strengthening of civil society organizations, building bridges between different fields of knowledge, sharing resources and promoting strategic alliances in favor of justice and rights.

Through its publications and video productions, ISER has also contributed to include its areas of expertise in the public debate and the development of public policies. That is the case of the ISER Journals series, a periodical that promoted debates on theoretical approaches in the interface between religious topics and social sciences.

Similarly, the ISER Communications magazine was created in 1981 and continues to publish projects and studies conducted by researchers from the institution and by associated researchers. We also highlight the scientific journal Religion and Society. Launched in 1977, it became an important theoretical reference for researchers of social sciences and religion in Brazil and Latin América.

ISER experienced periods of specialization in the production of documentaries, educational videos and community TV programs produced by TV ZERO, which went on to become an autonomous organization. Currently, in addition to the books, reports and other documents that were already produced, ISER Communications and Religion and Society are regularly published by the institution.

ISER played a big role in the context of ECO92, especially in the organization of the Great Vigil for World Peace, which gathered religious leaders from different faiths and ideologies, advocating for the relevance of a wide-reaching debate on the environmental issue. The Institute contributed to define AGENDA 21 as a model for international public policy for environmental protection. More recently, ISER participated in conversations at the official Rio+20 conference and also promoted debates and reflections at the People’s Summit, a parallel civil society activity held during the UN’s event in Rio de Janeiro.

ISER operates on two fronts that have been fundamental since its foundation: religion and social justice. In that sense, the Institute is structured in two large strategic areas: Religion and public space and Justice and rights system.

For structural, meaningful and sustainable social transformation to happen, we understand there is a need for action in four spheres:

The Religion and public space and Justice and rights system thematic axes comprise: 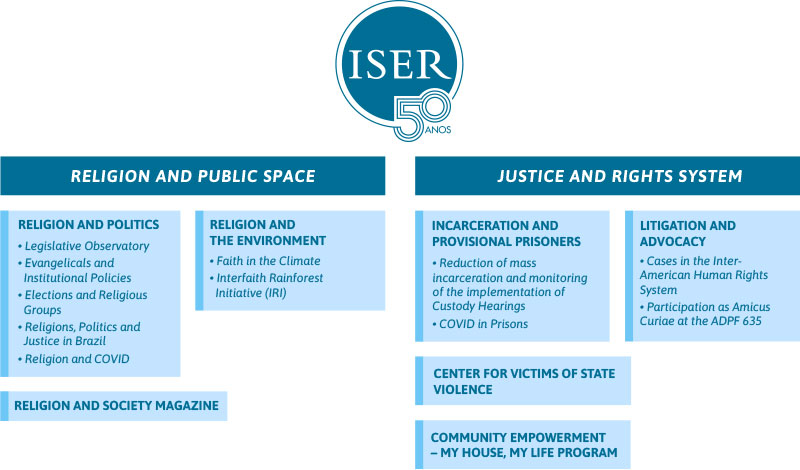